Naming characters is not always easy. You never can be sure you've got it right.

In one of my earlier books, I'd slapped the moniker Dennis onto a character, and the howl out of my editor could have been heard in Zanzibar. "That's a very strong character," she snapped. "A Dennis would be a wimp." I'd never imagined Dennises as being at all wimpish, so I ran the matter past my wife. She shook her head. "I'd think of someone wishy-washy if I read 'Dennis,'" she said. I shrugged, and Dennis became Will, which satisfied both editor and wife.

The biggest snafu I ever got into over a character name came out of SCAMMING THE BIRDMAN, my second mystery novel, a caper. I'd seen a faded painted ad, probably from the '30s, on a brick building beside the Alaskan Way Viaduct here in Seattle. It advertised a meat company named LoPriore brothers. The villain in STB was definitely arch, the nastiest person I've ever invented. Right off, Vincent LoPriore struck me as the perfect name for him. It seemed to ooze menace.

So imagine my surprise one day, after the book came out, when I opened my email and in my inbox saw I had a message from Vincent LoPriore. I could not bring myself to open it until I'd finished dealing with all the other messages, and when I opened the scary email, I found it was from a man named, yes, Vincent LoPriore, who lived in Pennsylvania. Someone had seen a synopsis of my book on the web, and called it to his attention. He asked where I'd gotten the name from, so I told him, said I hoped he wouldn't be upset, and that I hadn't imagined there was any real person anywhere named Vincent LoPriore. Fortunately, he thought the whole thing was very funny, and said he liked being cast as the bad guy in a murder mystery. So I sent him a signed book, and that settled the matter.

Just in case you think you ever have all bases covered in this game.
Posted by Larry at 11:14 AM No comments:

What to think of the famous/infamous Tiger Mom (BATTLE HYMN OF THE TIGER MOTHER, by Amy Chua, Penguin Press)?

My own parents were tigerish, delivering frequent lengthy, impassioned, high-decibeled lectures whenever a grade short of A appeared on my report card. I'd never get into an Ivy League college, they warned me. Point of fact, they were were right - I was turned down by every Ivy League school I applied to. But Rutgers did well for me. I don't feel as if I've been a failure in life.

I think I was easier on my own kids. I hope so. Anything did not go, but a B or the occasional C was not a trigger for tearing of hair or rending of garments. My son majored in Ethnomusicology in college, my daughter in International Affairs, and both took several years to find their way to careers that engaged them. But at all times, they took responsibility for their lives, supporting themselves and seeming to enjoy themselves as they wandered toward goals they couldn't yet get a fix on. Not all those who wander are lost, right. Today, both kids are doing work they enjoy, and earning decent livings.

More important, they both are in successful marriages, and my wife and I maintain close relationships as friends with all four kids. A far cry indeed from my relationship with my own parents, which finally had to be terminated because of their incessant derogations, criticisms, and demands on both my wife and me. Reason can hold emotion at arm's length for only so long, then the walls come tumblin' down. My guess, prejudiced though it may be, is that somewhere down the road, the Tiger Mom's behavior is going to deliver a bite to her butt that she'll never get over.

Back in Seattle Again 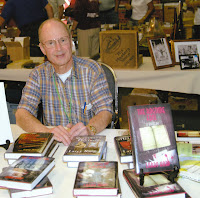 Round Three of my annual Music Trifecta, the Antique Music Box/Phonograph Show at Donley's Wild West Museum in Union IL, was its customary three-day revival meeting of the faithful, an opportunity to catch up with long-time friends I get to see only once or twice a year, while we all try to sell at least as many machines as we buy. This year, I actually succeeded. Aside from four excellent ragtime discs for my big Regina music box, my only purchase was an odd little Trumpetone gramophone with all original parts, but in need of considerable cleaning and restoring. Which is nice. It's more enjoyable to get one of these musical antiques back into proper condition before displaying it, rather than buying it fully restored and putting it on a shelf. Besides, machines in bad shape command lower prices.

In the picture, you see me last year (the photographer gave me the picture this year) promoting my books at Union. It's been gratifying to develop readerships among both ragtime and automatic music aficionados, and it was especially nice to have so many of them ask when my next book will be out. Not one looked disappointed when I said A PERILOUS CONCEPTION will have a medical, not a musical, background. That's all right, they told me, they'll still want to read it, and I should let them know when it's available. Who says you can't mix business and pleasure?

One cloud on the horizon: for the first time in my experience, next year's Scott Joplin Ragtime Festival and the Antique Music Show will take place over the same weekend. That's going to be one tough decision, and any way I cut it, I'm looking at a mere Music Bifecta in 2012. But I'll deal with that decision later. For now, the first piece of business is to figure out what my next mystery will be, and start getting it underway.
Posted by Larry at 3:13 PM No comments:

On The Music Trifecta Trail

Following on the Seattle Folklife Festival, the 2011 Scott Joplin Ragtime Festival in Sedalia MO is history. And speaking of history - the only thing hotter than the music was the weather, the thermometer hitting the century mark, with humidity not far behind. As I wrote in Chapter 5 of THE RAGTIME KID, they say the devil once spent a week in Missouri in June, then went home and set up hell to specifications. At least we had air conditioning for the indoor concerts. They didn't have that in 1899, and considering all the clothing both men and women wore in those days, there must have been an epidemic of heat stroke and fainting in Sedalia around the time Scott Joplin and John Stark signed the contract to publish "Maple Leaf Rag."
At a concert at the beautiful restored Katy Depot, fiddler Mike Myer played a set with Rich Egan, a terrific pianist from St. Louis who specializes in midwestern folk rags, the kind composed by Brun Campbell, the self-proclaimed "Original Ragtime Kid of the 1890s." The duo played Brun's "Frankie And Johnny Rag," and Rich dedicated the tune to me for my portrayal of Brun in THE RAGTIME KID, and for my research into his history. Never thought anything like that would ever come my way. And just for good measure, my books were piled front and center in the Depot Store, one of those nice times when books get promoted with absolutely no effort on the author's part.
In fact, that was Number Two in recent musical honors for this musical illiterate. A couple of months ago, Randy Myers, a friend I've made through music boxes, read my first mystery novel, THE MUSIC BOX MURDERS, then wrote a tune for me, "The Death By Music Box Rag." How about that. Just writing my books has been ample reward in itself, but Randy and Rich have put a delicious icing on my cake. Thank you, both.
On to the antique phonograph/music box show in Union IL tomorrow, which will wrap up this year's spring extravaganza of music. I'm already looking forward to 2012.
Posted by Larry at 10:11 AM No comments:

Don't ring my doorbell between Memorial Day Weekend and June 15. Don't call my phone. Don't give me any work to do. I'm otherwise occupied. First, there's the Seattle Folklife Festival, then the Scott Joplin Ragtime Festival in Sedalia MO, and finally the Antique Music Box/Phonograph Show in Union IL.

Folklife was this past weekend, 200,000 energized people crammed into Seattle Center to listen to every musical genre from bluegrass to Bulgarian, and pig out on cuisine from around the world. All performances were free, though relentless promotion for CDs, as many as six or seven pitches during a half-hour set, had eyeballs rolling all over the Center grounds. Take a lesson, authors.

For me, the highlight was an hour-long concert by Seattle legends Reilly and Maloney, who have an uncanny gift for crystallizing emotions into the loveliest displays of words and music you'll ever hear. If you're over 65, and the song, "One Day More" doesn't put a wistful little smile on your kisser, you're hopeless. If you're under 65, you just might not get it, but you can buy David Maloney's CD of the same title, and put it away in a safe place for a while. In time, you'll come to appreciate it.

On to Sedalia, and the Jet Lag Rag. River (and windstorm), stay away from my door.
Posted by Larry at 2:41 PM No comments: