I was about to open a box of breakfast cereal yesterday when I noticed this message on the box: "We are passionate and committed..." That brought up quite a mental image of what life must be like in that perfervid cereal factory.
Nothing new, just more and more so. I remember a day, close to twenty years ago, when CD players were just beginning to appear in cars. I needed to fly from Seattle to Minneapolis, then was going to drive to Chicago, and I wanted to listen to music on the way. So I made certain to reserve a car with a player, but when I arrived, the clerk told me she had no CD-playing cars available, and I'd have to take a radio-only model. I pointed to the large sign on the wall behind her, the company's pompously-worded mission statement, which ended with "We are completely committed to your total satisfaction." I told the clerk I supposed I was partially satisfied - after all, I did have a car at my disposal - but to be totally satisfied, I'd need a car with a CD player, and unless she provided me with one, she would clearly not be committed to my satisfaction, let alone not completely committed. The episode ended with my getting a bit knocked off the rental price, but leaving me still short of total satisfaction.
Now, cereal makers are passionate, mortgage brokers are one-hundred-percent committed to my financial well-being, every latest movie is the ultimate, any mundane accomplishment is awesome, and radio personalities urge me to see not just their friends, but their good friends, down at the local used car lot.
Up your ante, Buster. Talk about collapsing money markets. What's going to happen when the language bubble bursts, and our over-inflated verbiage collapses under the weight of its bloat? Words will have no meaning whatever, and we'll be left mumbling meaningless incoherences to each other. Or are we already there?
Posted by Larry at 12:36 PM No comments:

I can sit through a musical performance and not notice sour notes that bring groans from my wife. On the other hand, cliched, stilted, or inappropriate dialogue in plays or books go right past my spouse, while I grind my teeth and mutter. I figure I'm doubly-blessed: I can enjoy music that she can't sit through, and I have a leg up in writing dialogue.

A few months ago, I was talking to ragtime composer-pianist Tom Brier, from Sacramento, and was surprised to hear that he writes a musical piece very much the same way I write a story. He starts with a theme and, at most, a general idea where it's heading, then follows where it leads him, all the way to the end. After that, he revises, cleans it up, sharpens focus here and there, and sometimes shifts a musical phrase from one part of the composition to another. And occasionally, when he gets stuck on one part of the composition, he works on another for a while.

So, at the recent Scott Joplin Ragtime Festival in Sedalia, MO, my ears pricked up during “Perfessor” Bill Edwards' seminar on the origins of ragtime. Many people believe ragtime originated as a combination of characteristic black and white rhythms, the linkage of a regular march-like duple beat in the left hand, and a syncopated (emphasis shifted off the regular beat) melody in the right hand. Supposedly, syncopation originated in African music, and was brought to the United States by slaves.

But recently, ethnomusicologists, studying the rhythms of African music, have noticed that syncopation is conspicuous by its absence. Following up on this, “Perfessor" Bill suggested that syncopation actually might have originated in regional, possibly racial, speech patterns.

Okay. Listen to this performance of the “Merry Widow Waltz”(http://www.youtube.com/watch?v=4k7UjwGPpRs), then plug in these words: Please cut me some roast beef, and then pass the salt.” Nice, steady rhythm, isn't it, all words falling directly on the beat.

Now, listen to legendary ragtime performer/composer/historian Max Morath, singing a hit tune from 1909, by Brymn, Smith, and Burris. (http://www.youtube.com/watch?v=FrWGn2g1BN4). It's got a long title, which is also the first line of the chorus: “Come after breakfast, bring 'long your lunch, and leave 'fore supper time.” The rhythm of this speech is strikingly different, with emphasis frequently falling off the beat. Syncopation.

So, here's another arrow for the writer's quiver. When a particular character's speech marches or waltzes sedately along, that person is going to come across as pretty formal, maybe even stuffy. But a character who speaks in syncopated rhythms will strike the reader as far more lively. Something to keep in mind, particularly during rewrites.

Read all about “Perfessor” Bill Edwards' ideas on this and other ragtime subjects at http://perfessorbill.com/

Get acquainted with Tom Brier and his music via youtube. Watch his fingers during the concluding portions of Scott Joplin's "Cleopha." http://www.youtube.com/watch?v=Ej7XEt4suPg&feature=related
Posted by Larry at 2:38 PM No comments:

Two weekends ago, Seattle's Folklife Festival. The next weekend,
Sedalia's Scott Joplin Ragtime Festival. And this past weekend, Union
Illinois' Annual Antique Music Show and Sale. Union is 45 miles west of
O'Hare Airport, and the site of the Donley Wild West Town Museum, where,
in 1976, a group of antique phonograph collectors held a swap meet, and
had so much fun, they repeated it the next year. Now, 35 years later,
it's the biggest Buy-Sell-Trade event of its kind in the world, with
attendees from around the globe, most of whom are long-term friends and
correspondents, but actually see each other only once a year - at
Union. Picture a large hall with six rows of tables holding
hundred-year-old talking machines with beautiful horns, music boxes from
Switzerland and Germany that play the hit tunes of the days of our
great-great grandparents, and other strange and rare old-time musical
contrivances. No wonder I was so entranced, I forgot to take a photo.

Now, I'm in Scottsdale, basking like a lizard in the three-digit heat,
and will have an appearance tonight for "The Ragtime Fool" at the
Poisoned Pen Bookstore. Tomorrow, it's Borders in North Scottsdale, and
Clues Unlimited in Tucson, then Thursday, the Velma Teague Library in
Glendale for an interview with Librarian Lesa Holstine. That'll wind up
my 17-day tour. It's been a blast, but it's time to get back to my
writing room on Puget Sound.

Ragtime Is Dead? Hell, It Ain't Even Sick. 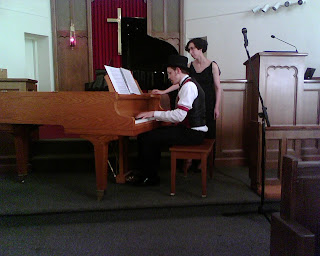 That remark by the late Bob Darch was much on my mind this past
week, at the Scott Joplin Ragtime Festival in Sedalia, MO. 'Maple Leaf
Rag,' the tune that started the ragtime craze in America, was published
in Sedalia in 1899, and every year, during the first
Wednesday-through-Saturday in June, the city hosts a music festival to
honor composer Scott Joplin and his publisher, John Stark.
The future of ragtime looks bright, with many young players and
composers, some only in their teens, showing off their pianistic skills,
compositional knowhow, and knowledge of ragtime history. To name only a
few, there were Adam Swanson, Wesley Reznicek, Morgan Siever (who is all
of 13!), Luke Vandermyde, and Max Keenlyside.
In the photo we see Brett Youens and Larisa Migachyov, both past
teenage, but still very much in their salad days. Larisa is turning
pages for Brett, because he's playing his composition, 'Rag Doll Rag,'
which was inspired by listening to a number of Larisa's compositions.
You can listen to Brett, Larisa, and all the ragtime wonder-kids by
searching their names on youtube. And then you just might be inspired,
yourself, and decide to come to the 2011 Festival and hear them live.
--Larry
Posted by Larry at 9:28 AM No comments:

A Trio of Music Festivals 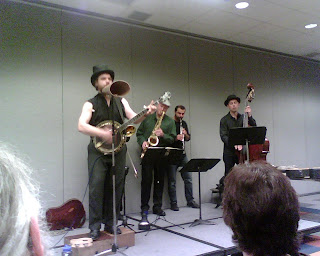 I'm in a stretch of a great three weeks, musically speaking. Every
Memorial Day weekend for the past 30+ years, I've spent a solid three
days at the Seattle Folklife Festival, and if the program has gotten
more into world music, there's still plenty of bluegrass, string bands,
jug bands, and hundred-year-old syncopated stuff, enough to let me prove
once again that my bad taste in music knows no bounds. This group of
banjo, trombone (mostly hidden), clarinet, sax, and bass was terrific.
And this year's multiethnic menu contained plenty of pleasant
surprises, such as a huge, complicated Irish pipes instrument, with keys
like any woodwind instrument and a bladder to be pumped by each arm.
Much more mellow than the usual bagpipes.
Speaking of menus, there was the customary dazzling array of food
vendors. One doesn't want to listen to music on an empty stomach, and
not many ones at Folklife do.
As always, the Seattle Folklife Festival was over far too soon,
with a long year ahead till the next one. But there are two more to go
in this year's trio. Tune in next week for the report on the Scott
Joplin Ragtime Festival.
Posted by Larry at 10:10 AM No comments: