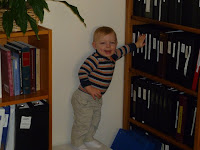 My old man taught remedial reading. When his students challenged his assertion that children as young as four could learn to read, he brought me into the classroom, stood me up in front, and handed me a book. I stammered my way through "Randolph, the Bear Who Said No," then held the book up to the class, pointed at a picture, and told the students, "See. This is Wandolph."

Encouraged...well, pushed by The Old Man, Myra - my wife - and I had our son, Casey, reading long before his fifth birthday as well. By the time Casey was six, his sister, Erin, was three, and had grown tired of having her brother ignore her in favor of books. She told me she wanted to read too, and I should show her how. I was skeptical, but I read through a book for her, tracing the words with my finger, then had her read it with me. Then I asked her to read it alone, which she did flawlessly. I thought she might've been just exercising a good memory, so I picked up an unrelated book, opened it, and told her to read. Which she did, again flawlessly.

The two kids used to go to the neighborhood library, pull books off shelves, and stagger up to the checkout counter, balancing armfuls as high as the tops of their heads. One day, a new librarian told them perhaps they should take just one or two books at a time. The children's librarian, Ms. Goldmanis, overheard, and told the newbie, "Those two can take as many as they'd like. They'll be back in a few days with all their books read."

Now Erin has a son, Simon, seventeen months old. She and husband Peter have been reading to the kid literally since he was born. Thanks to contributions from his grandparents and family friends such as children's author Peg Kehret and Dennis and Linda Ronberg, former owners of Linden Tree Bookstore in Los Altos CA, Simon has a world-class collection of books, many signed by the authors, and he likes to pull them down from the shelf and present them for reading to his parents and grandparents. Sometimes he'll bring a book off Erin's reading pile, and she'll tell him, "This one doesn't have any pictures. But look at all the words! You'll be able to read all these words one day!"

Yesterday, as Erin was at work in her law office, Simon came in, took a book from a shelf, sat, and opened the book. As he turned the pages, Erin realized he was saying, "Words, words, words." What made it even more funny is that the book was a dictionary - a Japanese-American dictionary.

I think the kid's working up to challenge his mother's family record. And apparently, his father's as well. According to Grandma Marge, Simon has five months to learn to read the numbers on license plates.

A DOUBLEHEADER: Me And Connie Mack, and Follow This Blog

Having turned in the manuscript for A PERILOUS CONCEPTION, my upcoming mystery novel, people ask what I'm doing now. When I tell them I'm starting on the next book, most of them look like they don't quite get it. One questioner straight-out asked me why. I guess I must have looked like I didn't quite get it, because he added, "You've had ten books published - isn't that enough?"

This week, baseball players began to report for spring training, the annual season of optimism and hope, and in the vehicle of my acquaintance's question, I traveled back in my mind to the spring of 1951, when I was very young and even more impressionable. For the first time in its fifty-year history, the Philadelphia Athletics were going to have a manager not named Connie Mack. During that spring-training session, an east-coast sportswriter wrote a retrospective on Mr. Mack's career, a half-century of some of the highest highs and the lowest lows in the ongoing story of the national pastime. The writer commented to the effect that he'd been asking the elderly manager for some years whether he was ready to retire. But Old Mr. Mack, the reporter wrote, would get a far-away look in his eyes, smile a little, shake his head, and say, "Just one more season."

When Connie Mack finally did throw in the towel at age 87, it was after a dreadful 1950 campaign in which the Athletics lost 102 games and finished dead last in the American League. Probably not the leave-taking the old man had envisioned. But should he have left the dugout after his 1931 AL pennant, walked away on top, and spent those twenty years in uneasy and regretful leisure? As a twelve-year-old kid, I didn't think so. I knew even then that for Connie Mack, baseball was not a pastime. It was his life. I had to admire the guy.

Would you like to have Larry's weekly blogs delivered to your email inbox? Just click on the FOLLOW button at the top right of the screen, register, and Bob's your uncle.
Posted by Larry at 6:08 PM No comments:

The Ragtime Kid in Venice

It's official now. The Friends of the Crowell Public Library in San Marino, CA have announced the selection of THE RAGTIME KID (and by extension, THE KING OF RAGTIME and THE RAGTIME FOOL) as the 2011 selection for their annual One Book/One City Festival. There's a preliminary schedule of programs during the next three months, leading up to my talk at the library on April 28. If you live in Southern California, you might enjoy taking in some of the ragtime festivities.

The Ragtime Kid was a real person. His name was Brun Campbell, and in 1899, at age 15, he hopped a train in Oklahoma, and traveled to Sedalia, MO, to take piano lessons from Scott Joplin. Before Brun left Sedalia to pursue a career as an itinerant pianist in the midwest, Joplin nicknamed him The Ragtime Kid, a title which Brun carried proudly for the rest of his life.

By the end of World War I, though, ragtime gave way to jazz, and Brun was out of work, so, like his father, he became a barber. In 1929 or 1930, he moved his family from Tulsa to Venice, CA - less than 15 miles down the 110 Freeway from San Marino - both to take advantage of better economic conditions on the west coast, and to provide a more healthful environment for one of his daughters who suffered from asthma. Brun lived in the same house and worked at the same barber shop in Venice from then until his death in 1952. Despite his wife's highly negative attitude toward ragtime (which led me to re-christen him THE RAGTIME FOOL), he was a major player in the ragtime revival of the 1940s. He even appeared as a character, though not in a very favorable light, in Ray Bradbury's homage to old Venice, DEATH IS
A LONELY BUSINESS.

But Venetians these days don't seem terribly interested in Brun; relatively few have even heard of him. That's not as it should be. I'll have more to say on this in upcoming blogs, as I keep you posted on the San Marino festivities. And I'll certainly have my say in San Marino on April 28. Crowell Public Library, 1890 Huntington Drive, 7pm.
Posted by Larry at 6:11 PM No comments:

Porky, The King, and Me - A Perilous Conception

When I was a young boy, I had a crippling stutter. My mother used to tell me, well, all right, the King of England stutters too. My reaction was along the lines of "fat lot of good that does me, when I have to go out tomorrow and listen to people finish my sentences, or worse, tell me, 'Spit it out. Just spit it out!'" And then, there were the omnipresent flocks of mocking birds: "What's the m-m-matter, L-L-L-Larry? C-c-can't you t-t-talk? You s-s-s-sound like P-P-P-Porky P-P-P-Pig."

So the movie, "The King's Speech," was a revelation for me, an intense two hours of slam-dunk empathy. King George VI's childhood stuttering history and mine were carbon copies, and when that poor guy grew up, he had to get behind a microphone and talk to millions of people by radio, sometimes while staring at hundreds of anxious faces in a live audience. Talk about blood running cold. My fingers were like ice.

But I got to apply a lesson from the King and Mr. Logue, his speech therapist. Last Thursday, I gave a talk to a group about my ragtime mysteries, and afterward, someone asked what my next book was going to be. "It's about an overly-ambitious obstetrician in 1977, racing to become the first physician to develop a baby by in vitro fertilization," I said. "But there are complications that lead to blackmail and murder."

The woman's face twisted into concern. How the hell could I have been so stupid, putting a word beginning with a hard P into my title? Now I was going to have to try to spit that out for months of promotional appearances.

Then I thought of the King, giving his critical speech at the conclusion of the movie, and Mr. Logue, like an orchestra conductor, coaching him along. "Slip in an 'ah' and ride it through," Logue whispered, as the King approached a stumbling block. My throat relaxed. "Ahp-erilous Conception," I said.

The woman's eyes widened. "A Perilous Conception" - that sounds intriguing."