A Good Thought To Carry Forward

The poet-physician William Carlos Williams lived in Rutherford, NJ, near my home town of Paterson. Williams worked all his adult life as a pediatrician and a practicing poet. His modus operandi was to multitask - he called it "stealing." When family or friends talked to him, part of his mind would follow the conversation, while another part would be working over a difficult pattern of words. He'd knock out a few lines on a typewriter in his office, between patients. That approach didn't work for me - in the end, I had to satisfy my one-track mind through serial careers, first in medicine, then in novel-writing.
My favorite Williams quote comes from the second volume of his five-part epic, "Paterson." I keep it on the wall above my desk, so I can't miss seeing it when frustrations start piling up:

"No defeat is ever made up entirely of defeat - since the world it opens is always a place formerly unsuspected. A world lost, a world unsuspected beckons to new places"

Good thought to carry forward into the new year.
Posted by Larry at 8:52 PM No comments:

My good friend, Bob Resta, recently commented to me as follows:

"Your non-fiction is more relaxed than your fiction. Your fiction is highly thought out, carefully constructed, and meticulously chiseled out of a big hunk of rock. Your non-fiction is more like your feet are up at the end of the day, you're sipping a beer, and saying to the reader 'Hey - isn't this an interesting observation.' One is not necessarily better than the other, just different."

Bob was right. For nonfiction, I set up an outline, write a draft, revise it once, maybe twice, and there it is. Easy. For fiction, my characters pay no attention to any outline I give them, and I end up doing just what Bob said, chiseling away at that rock, first on a macro scale, then in finer and finer detail.

At first thought, that seems opposite to what I'd expect. Shouldn't a relaxed voice be well-suited to telling a story, and a more thoughtful voice be more appropriate to organizing a bunch of facts, theories, or legends for a reader? Not necessarily. In nonfiction, no one's there to mess around with your outline. Even a nonfictional person in the narrative is going to have trouble rebelling against a fact-based outline.

Fiction writers come in two basic groups: Outliners and Seat-of-The-Pantsers. Grabbing a beer, kicking back, and seeing what happens might work for those novelists who outline their stories, then watch, smiling, as their characters march nicely from Point A to The End. But "Seat-of-the-Pantsers" like me are probably condemned to a lifetime of hacking layer after layer off that godawful rock called a first draft that their characters drop on them.
Posted by Larry at 8:38 PM No comments:

The Christmas Mystery of the Silent Snuff Box

We had a Thanksgiving Day guest this year to whom I showed a little musical snuff box, c1840s, with a lovely 2-tune Swiss musical movement below the snuff compartment. The man asked whether I'd consider selling it to him, so he could give it for Christmas to his wife, who is ill and housebound. He thought it would brighten her life.
I'd had no desire to sell the piece, which I'd bought 25 years before in England, but I decided, under the circumstances, to let it go. I thought I'd get more pleasure from imagining my guest's wife enjoying the music than I would, listening to it myself.
For the past couple of years, I'd been working intermittently to coax another, more-elegant, snuff box back to playing its music, but nothing I tried had had any effect. After my guest left with the snuff box for his wife, I decided to fill the space on the shelf with the recalcitrant, silent box. At least, I could look at it.
But as I put the box into place, I pushed the start button...and music played. When it stopped, I pushed the button again, and again, music played. I can't begin to tell you why.
As a confirmed skeptic, I'm comfortable saying that mysterious things do sometimes happen, and letting it go at that. Coincidence, coincidence. But what a great little Christmas story.
Posted by Larry at 4:59 PM 5 comments:

A Peculiar Case Of Immortality

The first human cancer cells to be successfully cultivated in a laboratory were called HeLa, an acronym consisting of the first two letters of the name of the patient from whom they were isolated. It was widely assumed, both in professional and lay circles, that the patient's name was Helen Lane. Lectures were given and articles were written, telling of the ironic way Helen Lane had achieved immortality.
But if irony's your dish, try this: an article in the December 1971 issue of the journal Obstetrics and Gynecology included a photo of the woman, along with the information that her name actually was Henrietta Lacks. The paradox of an immortal person being known by the wrong name impressed me to the point that I wrote an article about Ms. Lacks and her cancer cells for Smithsonian Magazine (March 1976).
Imagine my interest, then, when earlier this year, I read a review of a book titled The Immortal Life of Henrietta Lacks, by Rebecca Skloot. The author had spent ten years talking to Lacks' descendants, and researching the incredible tangle of legal fallout and medical progress and problems which trace directly to HeLa. The full story of Henrietta Lacks, her family, and her malignant cells is beyond imagination. Get a copy of this book, and be prepared to go without sleep until you turn the last page. If you'll be able to sleep even then.
Posted by Larry at 4:09 PM No comments: 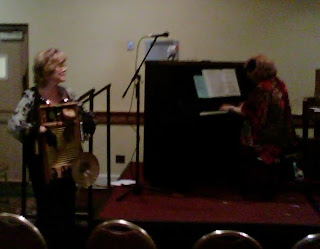 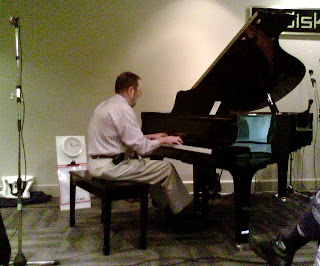 Hard to pick favorites among the performers at the recent West Coast Ragtime Festival, but here are a couple with whom I've become friends, and whose performances I especially enjoyed.
Jack Rummel lives in Niwot, CO, where he hosts the Ragtime America show on KGNU, Thursday evenings, 8-9 Mountain Time, http://www.kgnu.org/. He also writes the popular monthly Ragtime Music Reviews, http://www.ragtimers.org/reviews/. Jack writes and plays midwestern-style rags, and at the Festival, he presented two hour-long sets of his own compositions, displaying to full effect this complex ragtime form, which is simultaneously rollicking and nostalgic, even wistful.
Washboard Kitty Wilson is the percussionist in the Raspberry Jam Band, http://www.youtube.com/watch?v=HNxWU6sHlAU&feature=related  (whose pianist is the amazing Tom Brier, the man with two hands on each arm and twenty fingers on each hand).   Here they are at the Festival, playing one of my favorite pieces, Scott Joplin's, "Cleopha."  Historian/pianist Rosemary Hallum interviewed Kitty at the Festival, and it was very interesting to hear what she said and demonstrated to explain the way percussionists need to remember that their role is to enhance the performance of the pianist or the band, not drown them out. A lesson there for us all.
Posted by Larry at 1:21 PM No comments: