How To Get A Signed Copy Of An E-book

Writer/reader blogs and online groups are chockablock with pros and cons (mostly the former) of e-books and electronic reading devices. There's one question, though, that I haven't seen addressed: how do you get a signed copy of an e-book? Like many writers, I enjoy accumulating books signed by authors, whether personalized to me or not.

Recently, my friend Susan Schreyer brought out her first mystery novel, "Death by a Dark Horse" as an e-book. I knew it was an excellent, original work, a cozy in which the principal murder suspect is a horse, and I wanted to buy a copy. But not having a reader and not wanting one (a whole different blog post), the idea of sitting at my computer to read Susan's book, after a full day of sitting at my computer writing my own book, didn't appeal. "Besides," I asked Susan. "How am I supposed to get a signed copy?"

She had no answer to that, and there the issue lay for a short while. But last week, Susan told me she had just brought out a trade paperback version of "Dark Horse" via amazon. I sent in my order immediately, then brought the book to her for a signature. "Do you know - you bought the first copy of my book in paper," Susan said, and now I can proudly display her debut novel, signed to me and inscribed as Number One. Top that!

Which gives one answer to my initial question. I guess I also could have downloaded the book, burned the file to a CD, then gotten Susan to sign the disk. Doesn't quite seem the same, though. O tempora! O mores! 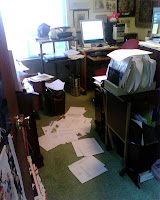 Carrying on from last week's post, the manuscript for my next book is finished and submitted. "Just" went from 399 occurrences to 168, "grin" from 84 to 25.

Now, there remains only to respond to recommendations from the editor, copy-edit the galleys, fill out the publisher's Author Questionnaire, and then plan promotions. Sending in a manuscript doesn't mean the book is finished.

A while back, in the middle of a promotional tour, this bit of doggerel came to me, apologies to Stephen Foster and Susanna:

I come down from Minneap'lis like a bat straight out of hell,
'Long Thirty-five to Omaha, sure hope the books will sell.
Then out to Lawrence, Kansas, a quick session with the fans.
And catch a plane to Scottsdale, all those readers with their tans.
Promo touring! You fly, you drive, you run.
You write a book, you think you're through?
Oh, no - you've just begun.

Still, submitting the "final" manuscript does bring a sense of completion. Like many writers, I feel some sadness; it's been likened to postpartum depression. But it's leavened by the howling in my skull of the story that's been waiting its turn for some six months, and now damn well wants me to draw my deep breath and get with it. In addition, as you can see, there's all the stuff I've had to put aside (literally and figuratively) for the past month to get the manuscript finished on schedule. Just because no one's forcing me to do it doesn't mean writing novels is anything but a full-time job.

Oh yes, almost forgot. The title of the book is A PERILOUS CONCEPTION. Poisoned Pen Press will bring it out in December, 2011.
Posted by Larry at 3:24 PM 1 comment:

An Award Received, An Award Given

Bill Farley founded the Seattle Mystery Bookshop in 1990, and ever since has been one of the Pacific Northwest Mystery Community's leading citizens, always enthusiastic, knowledgeable, and helpful to readers and writers alike. Last month, the Northwest Chapter of Mystery Writers of America deservedly honored Bill with its Willo Award (named for mystery author Willo Davis Roberts), as a "member of the mystery community who has contributed with distinction to the Northwest mystery writing scene." Read all about it here.

So I'm proud to report that my book, THE RAGTIME FOOL, was included among "Bill's Best of 2010." Read about that here.

My favorite part of writing a novel is the rewrite, where plot tightens, characters emerge, and interesting stuff happens that I never foresaw.

But that final rewrite, directly ahead of the submission deadline - there's a challenge. That's where I am now with my current project. Reading the manuscript line by line, word for word, all kinds of terrible things pop up. The worst may be overworked words.

Something was 'okay' 87 times, one time more than 'maybe' appeared. There were 399 instances of 'just,' many of which I deleted, but sometimes that just wasn't possible. I also got rid of a bunch of the 162 appearances of 'well', most of them lazy sentence-starting interjections. People were urged to 'come on' 34 times. That could wear out in a hurry.