Our Strengths, Our Weaknesses 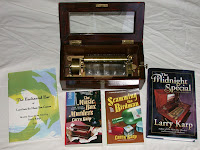 A Cylinder Music Box Made In Prague In The Late 1890s
With Larry's Music Box Mystery Series And His
Nonfiction Book, THE ENCHANTED EAR

This week, Myra and I are enjoying a visit from our friend Dave, a graphic artist, sculptor, and musician who earns his living as a professional restorer of antique music boxes. Dave is widely respected in the field as one of the best in the world at bringing back to life the finest...but hold on. First, a little background information.

Music boxes (self-playing instruments which make music via plucking of a tuned hard-steel comb, in the manner of the African kalimba or thumb piano) were first produced commercially in Switzerland about the time the eighteenth century gave way to the nineteenth. They were manufactured by watch and clockmakers, initially as luxurious embellishments for timepieces, but they quickly became popular and profitable, and before long, were being made as standalone items. Among the people who could afford these baubles, grand opera was the popular music of the day, so by the 1830s and 1840s, one could buy large, magnificent instruments which played stunning arrangements of music by Rossini, Mozart, Bellini, and Donizetti. Steel pins on a rotating cylinder plucked the comb teeth to produce the desired notes in the desired sequences. Each music box was an individually-produced work of art.

By the late nineteenth century, though, these cylinder music boxes had degenerated into smaller, mass-produced items which played humdrum arrangements of music-hall tunes of the time. And shortly thereafter, a different form of music box came along, one which used individual metal discs to pluck the comb teeth, such that the owner could buy any number of tunes, rather than being limited to the three, four, six, or eight melodies pinned to a particular cylinder.

Now back to Dave. Restoration of disc-playing music boxes and later cylinder boxes requires considerable technical skill, but the procedure is usually straightforward. The construction is standardized; the musical arrangements relatively uncomplicated. But not nearly all restorers possess the musical competence, patience and diligence required to bring back a one-of-a-kind early cylinder instrument to where it was when it left the manufacturer's shop. Every one of the thousands of cylinder pins must be set precisely, to pluck the right tooth at the right moment, with the right degree of strength. And that's where Dave shines. It's not uncommon, after hearing a box of mine that Dave had worked on, for a listener to smile and identify the restorer.

But our strengths are often also our weaknesses. Many times, I've watched Dave struggle for hours over a soft noise or a mistimed note, an error so slight that no one else had been aware of it until he pointed it out. Sometimes, as he persists in trying to make the problem disappear, another, worse, problem arises, and in the end, Dave needs to work his way back to where the diminishing returns originated, and then persuade himself to stop. Not that he's satisfied. When he visits us, he listens to boxes he restored years before, and hears things he'd like to try to work out, but knows he shouldn't.

Perfection just ain't a realistic goal. Our best efforts notwithstanding, it's as if we're constrained by an asymptotic barrier from doing more than approaching that ideal. The closer, the better, but still. I'll try to keep that in mind when I start tearing out handfuls of my hair as I go through the galleys of my next book. 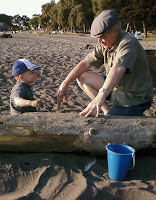 Couple of weeks ago ("The Days Dwindle Down," Sept. 7), I decided it was high time for my grandson, Simon, to make his first trip to the beach, so Myra and I took him off to Golden Gardens in Seattle for a couple of hours of sand and surf. He loved the sand, and his new bucket and shovel. He loved watching kids and grownups play Frisbee and beach their kayaks and canoes. But the surf was another story. The sound and motion of the waves breaking on the shore put him on guard, and he was not about to entrust his body to that strange and unreadable environment.

But then he discovered a little stream running down from the stand of trees behind the beach. That was much less intimidating. Soon Simon was wading, picking up little stones, throwing them into the water, and gleefully shouting, "Splash!"

We can do better than that, I thought, and bent over a rock about eight inches in diameter. "Help me pick this one up," I said. "Then we'll throw it in."

Simon thought that was a great idea. We stood at water's edge, held the rock by opposite sides, and as we swung it back and forth, I counted, "One...two..." On "three!" we launched the missile. It flew up, then came down with a most satisfying noise, splashing water all over the two of us.

"Want to do another big one?" I asked.

We picked up a rock about the size of the first one, carried it to the water, started to swing and count, but this time, on two, Simon let go of his side, and ran several steps back up the beach. "Hey," I shouted. "I can't throw this big rock by myself. You've got to come back and help me."

I dropped the rock onto the sand. A double milestone, fair enough. He learned Fool Me Twice, Shame On Me. And I learned that an almost-two-year-old kid can be more devious than any adult.

PS: OK - so I like that picture of the two of us so much, I wrote a companion piece for it so I could put it up. Grandfathers are allowed to do stuff like that. And anyway, it's my blog. Back to business next week.

More How Do You Get Your Ideas

Where do you get your ideas? That's the Number One Question I hear from beginning writers. So many people ask it, it must be a good question.

My wife and I went to visit a friend in Canada over the Labor Day Weekend, and there was no wait at all coming back across the border. Yes! We cruised into the USA in high spirits. But fifteen minutes down Interstate 5, the freeway suddenly morphed into a parking lot. Damn! There we sat, every now and then coasting a few feet forward.

An access road ran parallel to the freeway, and a short distance ahead of us, a spur connected the two roads. A large sign proclaimed in red letters to freeway drivers:

ONE WAY
DO NOT ENTER

But all of a sudden, I saw a car zip through a momentary opening in the right lane of freeway traffic, and onto the spur. Wrong way! The driver turned onto the access road just in front of a car whose driver had to jam on the brakes to avoid a collision.

The actual answer was D. Less dramatic than the others...or was it? Any of those first three possibilities (and many more) could be developed into a nice little crime story. I can even imagine C becoming a series with a bit of romance between a male and a female PI who tell people they first met by accidentally running into each other.

But my choice would be to consider the frustration of the impatient drivers who'd made the illegal move, and then found themselves out of the frying pan and in the fire. Easy to picture one of those idiots frantically maneuvering on the narrow shoulder to get back onto the freeway, irritating the living bejesus out of everyone around him. Tempers would flare, cars would crash, a riot would break out, an innocent person would be killed. And after the dust had settled and the blood had dried, the victim's spouse, parent, child, or friend would be obsessed with finding the culprit (who had vanished in the melee), and bringing him or her to justice. Which could work out in any number of ways, endless possibilities. From one event, enough story ideas for years of writing.
Posted by Larry at 3:08 PM No comments:

Labor Day has long been my least favorite holiday, signaling, as it does, the end of warm sunny days and the advent, as the days dwindle down, of long, cold nights. On the first Monday in September, I invariably hear Walter Huston singing the Kurt Weill-Maxwell Anderson classic, "September Song. And then I think of Satchel Paige, who said, "Don't look back. Something might be gaining on you."

This year, Labor Day promised to be the most depressing in history. Spring and summer were the coldest and cloudiest in Seattle history, and that's saying something. Even on days when we saw the sun, it didn't break through the cloud cover till mid- or late afternoon. As Labor Day loomed larger and larger on the horizon, my spirits sank lower and lower.

But the holiday weekend saw an amazing turnaround. First thing in the morning on Saturday, there was the sun, and there it stayed till sunset. Sunday, more of the same. Then, my wife and I had the nicest Labor Day in memory, sitting with a friend on the back porch, drinking lemonade, basking in 80 degrees of sunshine. And according to the weatherpersons, this pattern will continue till next week, what a gift.

Something is gaining on us, Satch, but it probably doesn't make a lot of sense to look back to see how fast it's gaining. Nor does it do much good to look too far ahead: one never knows, do one? I'd be smart, as the days dwindle, to spend a little energy to keep my place well-lighted as I focus on both my promotional work for A Perilous Conception, my December baby, and getting my next mystery novel and my nonfiction publication on Brun Campbell, The Ragtime Kid, off to good starts.

But right now, it's 82 degrees - imagine that - and my grandson has never been to the beach. He doesn't know what warm sand feels like between his toes, nor how to build a castle in sand. He doesn't know what a sand castle is. He's about to find out.
Posted by Larry at 3:34 PM No comments: